Tapan Paul (born on January 25, 1974) of West Bengal, India, set a record for sculpting unique Durga idols in bricks. He sculpted two forms of Goddess Durga — the first one depicting the killing of Asura as Mahisasur Mardini and the second one is with her family. Both the idols are beautifully sculpted on two different bricks, as confirmed on November 9, 2020. 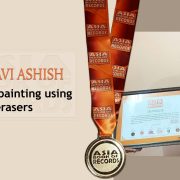