No doubt, world has developed too much, different types of media are being used to communicate or broadcast news or other entertaining programs, but the importance of radio is still increasing day to day. Still, it has remained its status as one of the cheapest electronic media of the world, which is everywhere available.

The record for the longest running broadcast DX NET on HAM radio operator is of 28 years and was achieved by Muthuvana Sanil Deep (born on January 17, 1959) from Calicut, Kerala, India wherein he has been a Short Wave Listening and HAM radio operator since 1990 with the individual call sign – VU3 SIO as on September 2018. 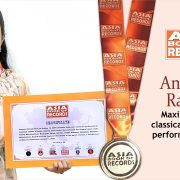