‘Swaradhika Dr. Dhari Pancham’Da’, a classical vocalist from Gujarat, India, played santoor  (an Indian musical instrument) for 29 hours, 29 minutes and 29 seconds, starting at 10.29am  on April 26, 2011 and ending at 4.02pm on April 27, 2011, at an event
organized by the Pancham Academy of Indian Music during the conclusion ceremony of Swarnim Gujarat, at the Gajjar Hall, Ahmedabad, Gujarat, India. The type of music played on the Santoor consisted of 33 Bandishs of 29 Classical Indian Raagas (Raga is a
melodic mode of Indian Classical Music).’
Tweet 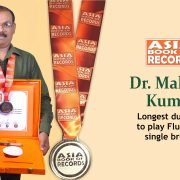