Shering Pavithran (born on May 1, 1987) of Kerala, India, set a record for making the dual bottle arts with Indian national symbols and national flags of all countries. She painted two bottles; one bottle was depicted with 17 national symbols of India, a small introduction about India with Vande Mataram song and the National Anthem and the second bottle was depicted with national flags of 195 countries, using acrylic colours, as confirmed on January 6, 2021. 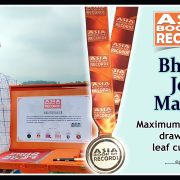