Madhav K. Anil (born on April 5, 2013) of Kerala, India, set a record for writing the alphabet in the maximum number of languages. He wrote letters of the alphabet in 19 languages including Malayalam, Russia, Spanish, Korean, Grantha and German at the age of 8 years and 11 months, as confirmed on March 9, 2022. 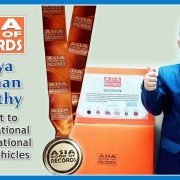